Well. That was fun.

It wasn’t really a week, but three days that felt like a week. And it was pretty enjoyable. Fieldwork is something that can be a pain in the arse but also really fun. Usually it’s a pain in the arse at the time but great on reflection. The major upside is getting out of the city for a few days and visiting beautiful places. The downside is generally poor weather, dealing with a lot of gear, and overcoming set backs (but working through the issues can be super rewarding).

I had all of this. I was at my field site in St Georges Basin setting up some experiments. Now, being a coastal lake it’s connected to the ocean (via Sussex Inlet) but the water exchange is very low and there’s also a large freshwater input, so the water is freezing! But it is a beautiful spot.

We were spending a lot of our time getting in and out of the water and I’ll tell you what, that time out of the water was not ideal! All you need is a slight breeze and you get very cold. But chuck on a wind breaker, eat some food, have a cup of tea, and away you go again!

My first day down there was mostly dedicated to setting up an experiment with seaweed. This involved getting in the water to collect a whole bunch of seaweed, bringing it out of the water to set up my experimental transects (see pic below) then placing them back in the water. Unfortunately, my initial method to place them back in the water was just not viable at all! The visibility in this system isn’t very good and we could barely see where we were placing the seaweed, let alone find them again when we dove back down. So I had to scrap that idea and come up with another one.

We came up with another idea the following day that worked a treat! And that was pretty rewarding getting that done. I’ll be back on Tuesday to collect half of them, and the rest in a few weeks time. 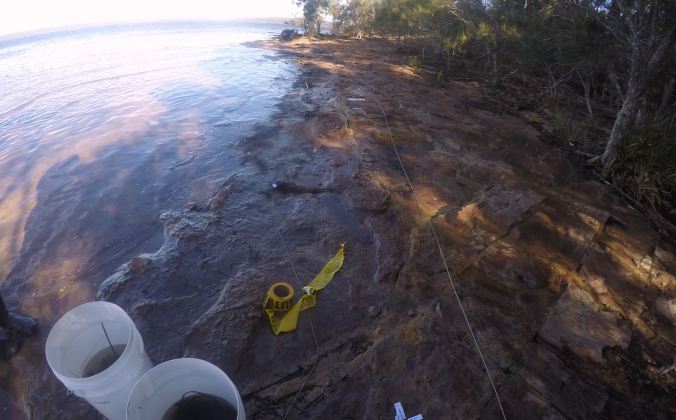 Experimental transects. You can see some seaweed ready to be redeployed on the left line, middle of the picture.

Percentage of squid taken from each habitat

I also ran some predation intensity experiments. As i’m trying to determine why different animals live in two very similar habitats, I want to know if there’s more stuff being eaten in one of those habitats over the other. This is a simple task.

To do this I put out 50 “squidpops“. It’s a bit of a ridiculous name but an effective tool. I put 25 in each habitat and leave them for a day, then count how many lost their squid. This was done twice, and wallah! I have data. And being the good bloke that I am, I made a pretty graph of the results so far for you.

By placing cameras in both habitats on all three days I was down there I will be able to understand what could be eating these little pieces of squid.

A “squidpop” in action. A small piece of squid attached to a garden stake that’s stabbed into the sand. Also, this is the kind of visibility we deal with at this site.

So, the weather was a little outrageous being quite cold and windy (the final day was VERY windy) but all in all it was a fun and successful trip. My team was bloody terrific (shout out to Keryn and Sam) and we got some data, as well as getting my experiments set up and running and ready for collection in the coming weeks!